Tickets can be purchased at a cost of €13.00 on site and online at the website www.ticketone.it . For young people between the ages of 18 and 25, the ticket costs €2 (+€1.50 advance sale); valid for citizens of the European community with an identification document. Free tickets and reductions as per regulations (booking is always required. The presale cost of € 1.50 does not apply to free tickets). Consult the link ‘Info MIC facilitations‘ for all the information on gratuities and reductions. Free admission on the first Sunday of the month.

The online purchase of the entrance ticket to the Herculaneum Archaeological Park allows you to reduce waiting times, especially during the high season. The ticket must be shown at the entrance, directly on a smartphone/tablet (QRcode) or already printed on paper to register it at the turnstile.

The archaeological excavations of Herculaneum have returned the remains of the ancient city of Herculaneum, buried under a blanket of ashes, lapilli and mud during the eruption of Vesuvius in 79, together with Pompeii, Stabiae and Oplontis.

After a first casual discovery following the excavations for the construction of a well in 1709, the archaeological investigations in Herculaneum began in 1738 and continued until 1765; they resumed in 1823, were interrupted again in 1875, until a systematic excavation promoted by Amedeo Maiuri starting from 1927: most of the finds found are housed in the National Archaeological Museum of Naples, while the birth of the Virtual Archaeological Museum dates back to 2008 shows the city before the eruption of Vesuvius.
The site of Herculaneum in 1997, together with the ruins of Pompeii and Oplontis, became part of the UNESCO World Heritage List. 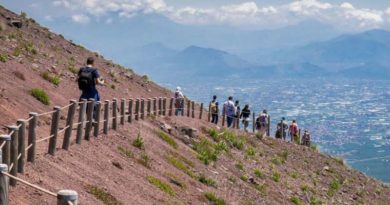