The activity between 79 AD and 1631: Vesuvius enters the history of volcanology with the eruption of 79 AD. It begins with the formation of a high column of gas, ash and lapilli, as described by Pliny, who from Miseno (20 km from the volcano), can observe it in all its development: “The cloud (…) in the shape of a pine, rose high into the sky and expanded as if emitting branches ”. Entire cities, including Pompeii and Herculaneum, are destroyed. The products erupted by Vesuvius cover the fields, fill the streets, houses and temples of the cities. After the eruption of 79 on Vesuvius a long silence falls and the first news of its persistent activity (“it emits a lot of ash that reaches the sea”) is reported in 172 by Galen, a Greek doctor who describes the properties of the air dry of the place created by underground fires. Dio Cassius reports of a violent eruption in 203, whose roars are heard as far as Capua, 40 km from Vesuvius. News of two other major eruptions that occurred in 472 and 512 are reported by Marcellino Comite, chancellor of the Emperor Justinian. He reports that on 6 November 472 “Vesuvius, a torrid mountain in Campania that burns with internal fires, vomited up its burnt bowels; during the day it brought darkness with a minute dust on the surface of all of Europe “. The eruption of 512 is described in detail by Cassiodorus, a quaestor of King Theodoric, in a letter written to ask for tax exemption for the populations damaged by the eruption. He reports that “a burnt ash flies (…) which, after having formed pulverizing clouds, rains with drops of dust even on the overseas provinces (…). It is possible to see rivers of ash flowing like flowing liquids that drag hot sands (…) and the backs of the fields suddenly swell until they reach the treetops “. An explosive eruption, which took place between 680 and 685, is reported by Paolo Diacono in the Historia Longobardorum and others are reported in 787 and 968. Leone Marsicano, in the chronicles of the Abbey of Montecassino, speaking of the eruption of 968, refers to “A huge and unusual fire that reached the sea”. In this eruption there is perhaps the first evidence of a lava flow, defined as “sulphurous resin that with uninterrupted impetus rushed towards the sea”. Numerous authors speak of eruptions in 991, 993 and 999, but since those years were pervaded by the conviction of an imminent end of the world, any reference to catastrophes must be read with a certain margin of suspicion. In the chronicles of the Abbey of Montecassino another eruption lasting six days from 27 January 1037 and an explosive event between 1068 and 1078 is reported. L’ultima eruzione, prima di un lungo periodo di quiescenza, avviene agli inizi del giugno 1139 ed è riportata sia dalle cronache di Montecassino che da quelle dell’Abbazia di Cava dei Tirreni, nonché dal segretario di Papa Innocenzo II, Falcone Beneventano, il quale scrisse che il Vesuvio “gettò per ben otto giorni potentissimo fuoco e fiamme vive”. Non si conoscono testimonianze attendibili sull’attività del Vesuvio dopo il 1139. Intorno al 1360, Boccaccio scrive che dal Vesuvio “ora non escono ne’ fiamme ne’ fumo”. In un imprecisato anno del 1500, Ambrogio Leone da Nola riferisce di un’eruzione durata tre giorni, alla quale fece seguito la formazione di fumarole gassose. Un soldato spagnolo, salito al Vesuvio nel 1501 insieme alla Regina Isabella, descrisse il cratere come “un foro da 25 a 30 palmi di diametro e da cui esce continuamente del fumo” che, secondo alcuni “diventa la notte una fiamma vivissima”. Nel 1575, Stephanus Pighius, un ecclesiastico belga in viaggio in Italia, descrive il Vesuvio “rivestito da splendidi vigneti, e così anche i colli e i campi vicini”. In mezzo alla sua cima si apre una voragine, ma il vulcano “è freddo, ne’ sembra emettere alcun calore o fumo”. Dal 1500 1631 è dunque certo che il Vesuvio sia rimasto inattivo o quasi. La montagna si era ricoperta di coltivazioni e i paesi distrutti avevano ripreso a vivere, dimenticando rapidamente le eruzioni passate. Grossi alberi crescevano fino al Gran Cono, il cono all’interno della caldera del Somma, e tutto l’apparato era chiamato la montagna di Somma, dal nome della città che sorge ai piedi del Vesuvio.

The activity between 1631 and 1944: In the night between 15 and 16 December 1631, amidst very strong roars and earthquakes, Vesuvius returns to activity with a disastrous eruption that sows panic and destruction. For some months the whole area had been plagued by frequent earthquakes, which had intensified a few days before the eruption. Gianbattista Manso, a scholar of the time describes the eruptive cloud that rises partly towards the sky (Plinian column) and partly expands on the slopes of the mountain like a torrent (surge and pyroclastic flows). The most violent phase lasted three days and the whole eruption ended in five days, leaving a trail of mudslides and landslides of volcanic materials accumulated on the slopes. Weak ash emissions and earthquakes continued for months. After this eruption Vesuvius changed shape: the summit, previously higher than that of the Somma, appears decapitated and the crater, according to Bouchard, a French scholar who climbed to the edge of the chasm, has a diameter of about two miles (three km and half), compared to the previous mile. Towards Torre del Greco six new eruptive vents had opened. With the eruption of 1631 Vesuvius enters a phase of persistent activity that lasts, except for brief periods, until 1944. Violent episodes are reported in 1794, 1822, 1834, 1850 and 1872. After 1872, slow outpourings of lava that they last for many years forming reliefs (domes of lava) near the crater. One of these domes, formed between 1895 and 1899 in the area between the Observatory and the Cone, constitutes the current Colle Umberto. In 1872, after the eruption, the cone of Vesuvius reached its maximum height with 1335 m a.s.l. In May 1905 a new eruption began, first with slow lava flows and, from January 1906, with intermittent explosive activity (Strombolian activity). On April 7, 1906, the eruption came alive with high lava fountains and strong earthquakes, and culminated with the formation of a Plinian column that reached a height of 13,000 meters. The eruption ends towards the end of April. After the eruption of 1906, the summit of Vesuvius appears truncated and has a large chasm of about 500 meters in diameter and 250 in depth. The crater rim is lowered to 1,145 meters at the lowest point, that is, 180 meters less than before. The internal walls of the crater have an inclination of 40-45 ° up to about 80 meters below the rim and then, towards the bottom, they become almost vertical. In subsequent years, the interior of the crater is affected by continuous landslides of incoherent material that forms the almost vertical walls of the chasm. On May 10, 1913, the bottom of the crater sinks by about 75 meters for an area with a diameter of 150 meters. Starting from July 5, 1913, this sinking is filled with lava. Small explosions cause slags to be thrown, which accumulate forming a cone. Between 1915 and 1920 the bottom of the crater rises about 100 meters. On November 28, 1926, the first lava overflow outside the crater took place and three years later, in June 1929, a violent eruption was recorded. After this eruption, Vesuvius alternated between stasis and activity, mostly concentrated within the cone, for several years. On 12 August 1943, the lava starts to flow again inside the crater from a mouth placed at the foot of the cone. The opening of this mouth causes the collapse of the cone which, in turn, causes an increase in explosions. On January 6, 1944, the lava flow increases. From a fracture that opened on the side of the cone, a flow arises which, after having invaded the western sector of the crater in less than an hour, pours out, pushing for more than 100 meters downstream. Lava continues to flow outside the crater until January 26 and inside it until February 23, the day when the effusive activity ceases entirely. In the early hours of 13 March 1944 the walls of the cone collapsed and all kinds of activities ceased until the afternoon of 14 March, when new weak slag throws resume, the frequency and abundance of which slightly increases over the next three days. In the night between 17 and 18 March, with a powerful collapse of the cone, all activities cease again. 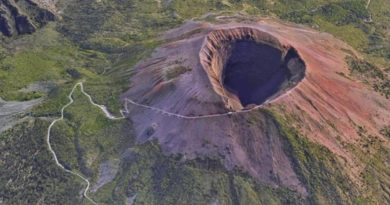